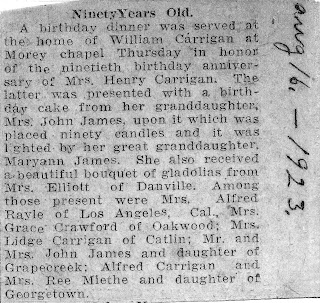 "A birthday dinner was served at the home of William Carrigan at Morey chapel Thursday in honor of the ninetieth birthday anniversary of Mrs. Henry Carrigan. The latter was presented with a birthday cake from her granddaughter, Mrs. John James, upon it which was placed ninety candles and it was lighted by her great granddaughter Maryann James. She also received a beautiful bouquet of gladolias from Mrs. Elliott of Danville. Among those present were Mrs. Alfred Rayle of Los Angeles, Cal.; Mrs. Grace Crawford of Oakwood; Mrs. Lidge Carrigan of Catlin; Mr. and Mrs. John James and daughter of Grapecreek; Alfred Carrigan and Mrs. Ree Miethe and daughter of Georgetown."
Unknown newspaper (perhaps Danville (Illinois) Commerical-News; handwritten date Aug. 16, 1923.


Lucretia Savage was born 16 August 1833 in Brown County, Ohio, married Henry Carrigan 3 January 1850 in Brown County, and moved with her husband and first child to Vermilion County, Illinois, about 1854. 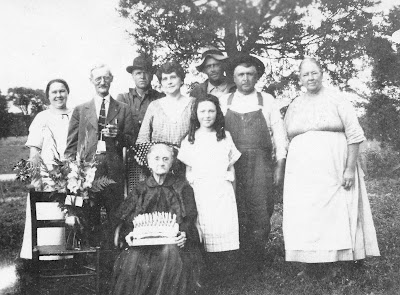 In addition to the newspaper clipping which my mother preserved in one of her "ancestor albums," she also included a picture of the event. Standing, from left, are Mrs. John (Lucinda Carrigan) James, Lucretia's daughter, my grandmother; Lige (Elijah Fitch) Carrigan, a cousin; John T James, my grandfather; Luella (Carrigan) Rayle, Lucretia's daughter; Alfred Carrigan, Lucretia's grandson; John William Carrigan, Lucretia's son, and his wife, Rose Ann (Rogers) Carrigan. Lucretia is seated, holding her cake with the 90 candles and standing to her left is 11-year-old Maryan James (one 'n' on the first name, please), my mother.

Sorting Saturday - I've GOT to get organized - week 2

Since my first post last week, I've made a good start. As far as getting my research notes in the right folders, I'm into the C's.
That's the good news.
But I ran into a serious bit of bad news when I hit the Brockway family folders. I have a lot of those, mostly from the days before computers, before my List of Sources Searched (LSS) database.

Most of my Brockway notes were numbered. Unfortunately, those numbers and research note references did not appear in the LSS.
I couldn't believe it. How did that happen?
Undoubtedly, these notes were from the days before computers. Logically, they were entered on my paper LSS. Where those sheets are, I have no idea. I've moved twice since these notes were created and the last move was a real house cleaner.

The only recourse was to scratch out the numbers and leave them as uncatalogued. Since then I've found other folders with similar numbered notes not in the LSS.
Yesterday when I was doing my volunteer bit at the Kentucky Historical Society library, I asked the director if they had a written policy on what they will accept in the way of vertical files. They do. You can get a copy by emailing the library's reference desk
Rule No. 1 got my attention right away

The rule goes on, but you get the idea. And so did I.
I think I've been pretty good in the last 20 years in recording enough information about where I got the research note to create a solid bibliographical reference. I don't put anything into my RoosMagic without a good source citation. But the 25 years before that time, . . . well . . . hmmmm . . . maybe not so.
If a research note was a book or a microfilm, I probably have enough information to recreate the citation through WorldCat or the FamilySearch library catalog. Notes taken in courthouses will be more difficult. Notes left to me by my mother will be very difficult.
I resolve: If I can't be absolutely certain about the citation information, the notes go in the trash! They are of no value to me or to anyone else!

I've decided: Now is the time to do that work. No sense shuffling the research notes once into properly colored folders and then coming back, maybe months from now or never, and shuffling them again into the LSS and different colored folders.
This makes the job much more time consuming but more valuable over the long term.
Wish me luck!

Email ThisBlogThis!Share to TwitterShare to FacebookShare to Pinterest
Labels: organization

I've GOT to get organized

And I have 375 new file folders to make a start.
As you can probably tell, I'm a folder devotee as opposed to a binder devotee. The choice goes back a long way.
When I first started doing research, long before computers, everything was hand written. I designed my own family group sheets to allow a closer link between facts and sources. I mimeographed them because I needed a lot of them.

I also printed my own sheets for a List of Sources Search (LSS). One sheet at first, then several sheets divided by source type.
All my sources were numbered and the number entered on the LSS.
In the beginning, one folder held all the sources. But not for long. It just grew.
When that happened I created folders for each ancestral name on my pedigree charts. In those folders the sources are filed numerically.

When computers came along the LSS was migrated to an Access database. What an improvement that was. Access automatically assigns the source number (now 7,100+). I stole the source type categories from the LDS library catalog. With Access I can sort by type, by name or by place or a combination of those. Usually I work with a name sort.

Searches in sources that did not produce results also are entered in the LSS. No sense doing that search a second time. I must admit it's very hard for me to keep track of unsuccessful online searches. They go so fast.
Generally, if I want to know if I've searched the 1850 census of Dauphin County, Pennsylvania, for Samuel Martin, Access only takes a few seconds to answer that question. I can also pull the numbered source from its file folder -- if the sources are all in order and in the folder where they're supposed to be.

Sometimes that doesn't happen.
Some years ago I started to color code the folders within each ancestral name.

The blue, green, manila and purple folders are filed alphabetically by ancestral name.
I have a couple other colors I use:
I've created a spreadsheet on Google docs and I am tracking my progress -- entering the ancestral name, the date I got the sources sorted into the correct colored file folders, and how many sources have not been entered into the LSS and RootsMagic. Mostly, I've had to enter "Many."
I'm trying to do at least one ancestral family a day. Perhaps in three months I will at least have the folders properly organized. Then entering the sources into the LSS and RootsMagic will begin.
I'm also in the middle of an organizational and scanning effort on our family photos. We have thousands! But that's a post for another day.
I welcome your suggestions and comments.
Wish me luck!

Have you been surveyed?

Myles Proudfoot is conducting a survey of genealogists/family historians. You can join the statistics by clicking here.
It will take 15 to 20 minutes, depending on how much you ponder each question. Or how long you laugh.
The question that gave me my morning guffaw was, "Do you believe in life after death?"


As my dad used to say (I think it was him), "What has that got to do with the price of tea in China?"
Does someone believe genealogists collect names of dead ancestors so they'll have an address book for when they cross the River Styx?
My grandmother was a member of a spiritualist church. I'm not sure what the official title was. I used to sit and watch her make that pointer fly across the Ouija board, spelling out answers to our questions. I always hoped I might get a clue to help track down an elusive ancestor. Never happened, unfortunately.


One of my jobs, many years before I retired, was as a travel writer and editor. I made some very interesting friends on some of the trips I took. At an evening dinner on one of the trips it was suggested that we each name three people living or dead with whom we would like to have dinner. Jesus usually topped the list followed, as I recall, by Julius Caesar, Napoleon, Henry VIII etc.
My list was entirely different:


First: William Gill -- My paternal line brick wall from New Brunswick. "Is that your real name," would be my first question. (I don't match any Gill DNA families.) "Where did you come from?"


Next: I would have similar questions for a multitude of other end-of-line brick walls like Mark Carrigan, William Hendrickson, Allen Rogers, John James, etc. endlessly!


Could I have more than three to dinner?