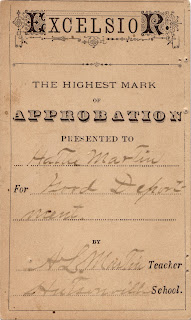 Alvin Leslie Martin was born 17 October 1855 in Hamilton County, Indiana, the son of John Henry Martin and Sarah Cassandria Bright. He arrived in Crawford County before the 1880 census in which his occupation was given as "at school."

When or how long A. L. Martin taught school in Hutsonville is not known. He married Dora B. Braden on 14 Jun 1890 in Hutsonville and by 1900 was living in Chicago. Ultimately the couple moved to Los Angeles, where they both died. They had no children.

We might get some clue of the date of this card from the student who received "the highest mark of approbation" for good deportment -- Hattie Martin. There was no favoritism in this award. As far as I know, Hattie was not related to A. L. The 1880 census of Hutsonville shows a Hattie Martin as the 11-year-old daughter of Warren Martin. According to the Holmes Family Tree on Ancestry, she was one of six children of Warren Martin and Lucy Maria Willard. If this is an elementary school card and if Hattie entered school at age six and completed the eighth grade at 14, that would date this card as 1875 to 1883.

Here is the pretty picture from the back of the card. 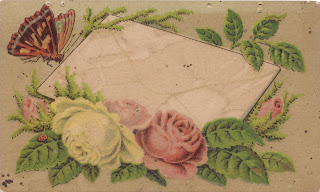