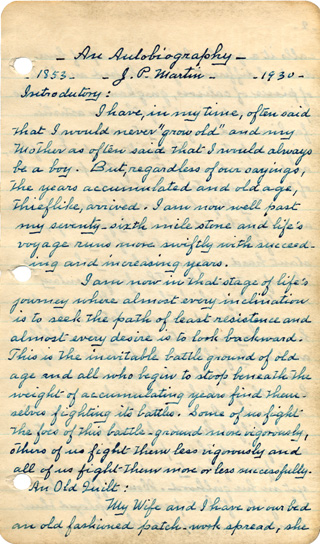 "My Wife and I have on our bed an old fashioned patch-work spread, she calls it a quilt. It is made up of hundreds of different sized, shaped and kinds of pieces of calicoes, ginghams and muslins pieced and joined together in artistic fashion and conforming to some major design or pattern. This quilt is a picture of life, and reminds me of its variegated patch work of time, circumstance and deed."


Josephus Perry Martin was "well past my seventy-sixth mile stone" when he wrote those words, comparing the many and varied events in his life to a patchwork quilt.


Two years before his death, he completed an autobiography.  A copy was found in Paul B Hendrickson's home after Paul passed away. Josephus was Paul's uncle (his mother's brother) and my wife's great uncle. It is handwritten on lined notepaper measuring 4.25 by 7.25 inches and consists of 33 sheets written on both sides, a total of 66 pages. The pages were found in a black, three-ring binder marked on the inside cover as being sold by Everybody's Book Shop, Dayton, Ohio. Josephus lived in West Carrollton, south of Dayton, in 1930.


In addition to personal history and genealogical information about his parents' family and his own family, Josephus writes about his religious odyssey. He was first a minister in the Progressive branch of the Dunkard church. In June 1887,  "because of radical changes in my religious views of which I will later write, I was asked to resign as a Dunkard minister, I did so and also severed my membership. This act branded me as an arch heretic and dangerous." Josephus found new belief through The Watch Tower, the publication of the Jehovah's Witnesses. He apparently continued as a minister in that faith.


I have added an introduction to the autobiography and a brief epilogue. More information and pictures will be added as time permits. Two Martin cousins have offered to help and I hope direct descendants of Josephus will be located and agree to assist. My website is at http://www.jimgill.net and a direct link to the Josephus Perry Martin autobiography would be http://www.jimgill.net/words/jmartin_intro.html.

One of the mysteries I hope to unravel about this autobiography is the relationship between Josephus and his wife, Mary Bright. Josephus says "Mollie's father and my mother were first cousins." If I understand it correctly, that means they had a common grandparent. My guess is that the common grandparent might have been in the Bowman family. Time and future research may tell.