Look on the back 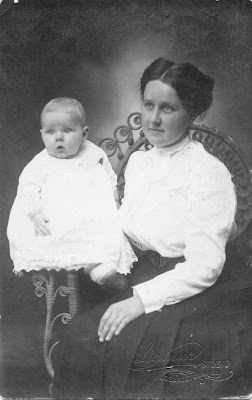 Since finishing reorganizing my research notes, I've tried to concentrate on scanning pictures from my mother's "Ancestor Albums."
On a majority of the pages, particularly the first ones I worked with, the pictures were pasted down.
But, the last few I've worked with my mother started using photo corners. With the pictures in corners, the options were to risk damaging the photos by taking them out or scan them in place.
At first I opted to scan them in place but then I decided to try to get one out without damaging it.

Holy Cow! Look what's on the back -- names and dates my mother had not written on the scrapbook pages next to the photo.
This photo was the biggest treasure so far. When I got it out of the corners and turned it over I found it was a postcard which the woman in the picture, my great aunt Edith (Carrigan) Elliott had sent to her mother, my great grandmother, Rose Ann (Rogers) Carrigan.
The stamp had been peeled off and the postmark date was unreadable, but my mother had identified the baby in the picture as Floyd Elliott, born 25 May 1911. It would seem from the age of the child that the picture was taken later in that year and probably mailed soon after -- perhaps November 4, 1911.

The card was addressed to Mrs. Rose Carrigin, Georgetown, Illinois, RR.
The message was "Hello - Ma what do you think of this picture why dont you cone up I have got a quilt in good By Edith" 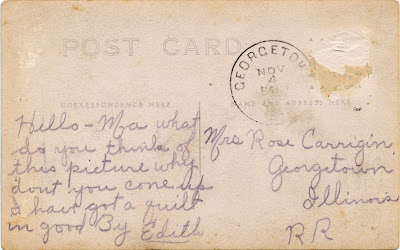