Back in November I received an email from Daniel Grimsley telling about a postcard of a World War I soldier he had found among papers of the Grimsley and Flake families of eastern North Carolina that didn't seem to connect to his family.  Daniel had found my website that includes the letters, diary and pictures of Paul B Hendrickson concerning his service in World War I. 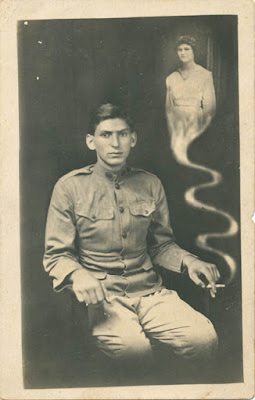 The mystery postcard had not been mailed but writing on the back said, "Priv't. James Bernikow, Med. dept. 79th Inf., Camp Logan, Houston, Tex."
Paul trained at Camp Logan in Houston with the 33rd Division. The 79th Infantry was not part of the 33rd.
I believe the 79th Infantry (from the postcard) was a part of the 15th Division. The 15th was a Regular Army division that trained at Camp Logan after the 33rd Division had left. I do not believe it went overseas. There is a website called New River Notes that has wonderful information about the various World War I divisions, including the 15th.

But who was Private Bernikow?
A search at Ancestry located an emergency passport application of a James J. Bernikow at the American legation in Panama dated 1 December 1919. In the application he states he was born 28 December 1895 in New York City the son of Samuel M. Bernikow, a Russian immigrant. He also states he was in the Army and was at Brest, France, from January to December 1918. The passport photo is at right. Is it the same man as the one in the postcard? The ears sure look the same. The hairline and eyebrows are also similar.

I also found a 1910 census record for a Samuel Bormkow (corrected to Bernikow) age 40 born Russia with son James age 11 (born 1899). I've asked Ancestry if they could identify the person who made that correction but it was made before they started keep track of such things. Might be someone related.
Obviously, if James was born in 1898 or 1899 he would not be the first man to exaggerate his age in order to enlist in World War I or obtain employment afterwards.

The mystery postcard has an interesting feature -- the woman's face in the cigarette smoke cloud. Could she have been a girl friend? Or, was this a stock picture added to all postcards of this design representing the girl the soldier left back home?
It sure would be nice to know the answers to all these questions. And I'm sure Daniel Grimsley would like to know as well. Daniel said in his initial email that he would like to return this postcard to James Bernikow's next of kin.
If you can help solve the mystery, leave a comment or email me.