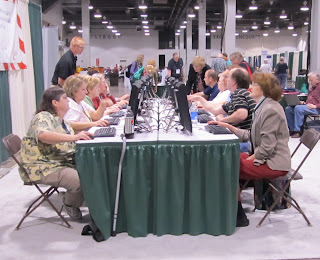 FamilySearch is one of the many organizations that has invested heavily in exhibiting at the National Genealogical Society Convention in Cincinnati.
Not only do they have a large booth where they are demonstrating and teaching people how to use the website, but they have two smaller areas where they are recruiting and teaching new indexers for the 1940 census project.
I was amazed when one indexing helper estimated they had recruited 200 new indexers at the two areas. And this was only a day and a half into the four-day event.

How could that be?
I would have assumed that at an NGS convention they would have been "preaching to the choir." All genealogists know how important indexes are.

Every time I'm led to a record on the FamilySearch site I'm reminded that someone created the index that made it possible. Now it's my turn to create an index for the next researcher.
Giving back, as they say.

Attended four great sessions today. The limit my brain could absorb.
Diane VanSkiver Gagel kicked off the morning ("Gateway to the West: Researching in Ohio) by emphasizing how lucky people are, like me, who have Ohio ancestors. A wide variety of records of Ohio townships and counties are open and available for research. I'm anxious now to get back to researching my wife's Hendrickson family, particularly at the regional archives.

The second session ("How to Find People Who Don't Seem to Be There") was packed despite the fact it was a huge room. Elizabeth Shown Mills talked about principles for using indexes, problems to work around and strategies for eliminating them.

The morning concluded with Patricia Walls Stamm discussing "Obtaining 20th Century Military Records from the St. Louis Personnel Records Center." Her talk included some ghastly pictures of the fire in 1973 that engulfed the then record center. There's bad news and good news, she reported. Many records were lost, but not all.
After a quick hot dog for lunch, there was plenty of time to tour the exhibit hall and talk to vendors about their products. I'll have to go a little more in depth with some of them before I leave.
Tonight . . . research at the Cincinnati Public Library until my energy runs out.  I particularly want to see a book At the Headwaters of Cheesequake Creek. I'll tell you tomorrow what I find.