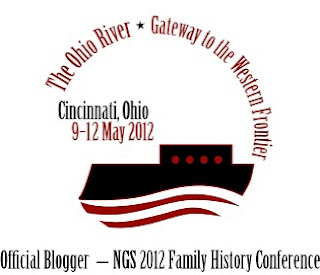 In less than a week the center of the genealogy world will be in Cincinnati. I'll be there.
Although I've been researching my family history for more than 45 years, this will be my first national convention of any genealogy organization.
I won't have anything to compare it to. I'll just try to use my newspaper background to tell it like I see it.

I only live a little over an hour away in central Kentucky, so it would have been foolish to miss it.
At first I was only going to go for one day -- then two. The economies of joining NGS and staying the whole four days made sense. So I did join and I am staying for everything.
I've been trying to prepare myself to get the most out of it. I got business cards printed (more than I will ever need) and mailing labels as suggested by NGS. I will wear comfortable walking shoes and a sweater for cool meeting rooms. I've submitted my ancestral names for the surname catalog.

I had been wanting a small, light laptop so I settled on an Acer Aspire netbook plus a light, over-the-shoulder carrying bag. One motivation was to take it to NGS, but I'm struggling to figure out how I'm going to be taking notes.
I had hoped to import the syllabus/handout of each of the talks I wanted to hear into either a Google doc or an Evernote note. That's a lot harder than I thought it would be. Many of the syllabuses are the product of page makers and do not translate well from the huge PDF into separate text documents. Amazing what gibberish a simple copy and paste produces.

Although we are supposed to have wifi throughout the convention center, I think Evernote would be a safer choice than Google docs since Evernote would be available for note taking even if wifi disappeared. Google docs would not.
I could always fall back on paper and pencil.
Going through the syllabus has had one advantage. I may change my mind about some of the lectures I planned to attend.

When I first registered many months ago, I hoped to sign up for one of the "consultations." But after looking at the application form I realized I would need a consultation just to fill out the application.
I'm looking forward to Thursday evening at the Cincinnati Public Library. I've been there before and can go again, but might as well take advantage of being close by. It's a great place for research.
So, what am I forgetting?